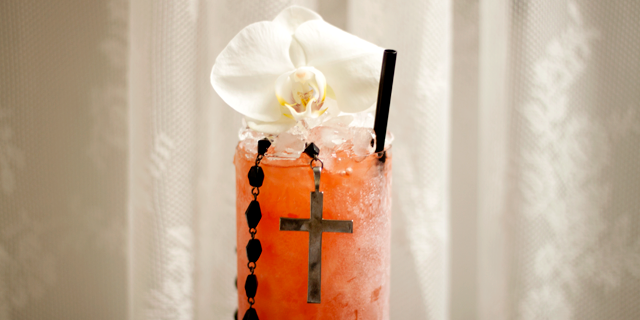 Mixology Monday is back with a theme that really warms an old goth's heart: Spooky Sips! Let this month's host, JFL of the great Rated R Cocktails blog, explain what a spooky sip might be in his announcement post. For myself, I prefer creepy in theory over brain hemorrhage shots and, as an exploitation cinema junkie, how could I not make a Zombie drawing inspiration from the good times when zombies actually were living dead drones and not rabid disease carriers or whatever they are today? (Sorry 28 Days Later, you were the best in 2002, but you simply killed the genre.) 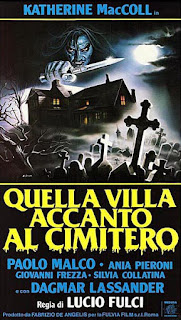 Before drinking, let's head back to the turn of the millenium. At the age of 16 I rented a videotape labeled House by the Cemetary (1981). I had already seen direction Lucio Fulci's The Beyond, which I found oddly haunting and poetic in all its graphic ugliness and I still consider it a masterpiece of its subgenre (that is Italian produced zombie films of the early 80's), but watching hus House by the Cemetary was a life-changing event. That's when I learned that flaws are sometimes an important part of a cinematic experience.
The front of the VHS cover had absolutely zero to do with the story, and movie itself contained, among its dubious highlights, an over-the-top bat-slashing scene, a church organ porno soundtrack and the most annoying poorly dubbed little brat ever recorded in subcultural history - all along the usual strained acting and an completely incoherent plot.
But House by the Cemetary is also thoroughly bleak and creepy, and builds up a nightmarish atmosphere. Lucio Fulci clearly had visions, but not the resources to put them together properly. You have to accept these films for what they are, as well as love them for what they could have been. 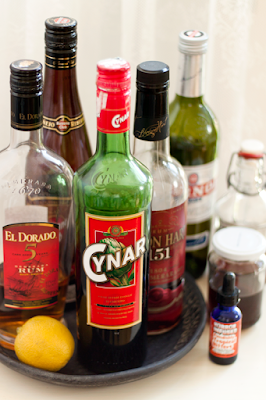 I'm drifting away. Back to the booze.
Even though House by the Cemetary isn't technically a zombie flick, I namned this Zombie-esque drink after its antagonist Dr. Freudstein. I started out with the easy-to-make mid-century version of the Beachcomber's Zombie and ended up with a 10+ ingredients drink (it only happened) less fruity, but with more warm spices fitting to the season.
Of course, we need to put something Italian into the mix to honour Lucio Fulci, Ruggero Deaodato, Dario Argento and those other maestros of their own niches. Cynar works wonders with these rich spices, but only in a pinch for the earthy flavor - I wouldn't want a bitter Zombie.
For additional screams (and I swear, this too only happened) everything is topped with tiki friendly Horror Infused Bitters from Horror in Clay, who also makes some cool Lovecraftian mugs and barware.
There is a lot going on in the Freudstein. The flavors are deep and the alcohol content is high. Approach with caution and have a proper meal before drinking.
That's all for now, children. See you next Halloween when we make a cocktail out of Cannibal Holocaust. 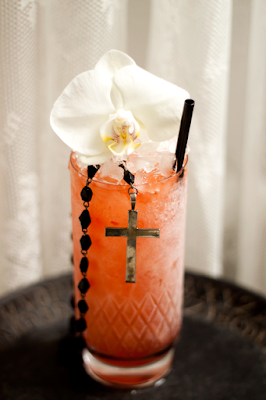 Shake with crushed ice and pour unstrained into a tall glass. Add more ice to fill and garnish with a  rosary.